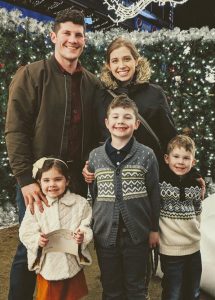 Dr. Ryan attended the prestigious University of Western States Chiropractic College in Portland, OR which is one of the top evidence informed chiropractic schools in the world. He earned his Doctorate in Chiropractic in 2016.

For his undergraduate studies, Dr. Ryan attended California Polytechnic State University and graduated with a BS in Kinesiology while receiving a full ride athletic scholarship where he competed as a four-year varsity wrestler for the Division I program in the PAC-10 Conference.

Dr. Ryan is happily married to his incredible wife Kaitlin who has been by his side through all his studies as his biggest supporter. He and his wife have been blessed with 3 wonderful children, two boys Titus (7), James (4), and their daughter Rose (3). Dr. Ryan is the oldest of his 11 other siblings who are all boys. Family is a very high priority for Dr. Ryan as he raises his own family and works to incorporate chiropractic care into the families of the greater Spokane county.

As a very compassionate chiropractic physician who cares for people of all ages, Dr. Ryan has a strong desire to treat the whole family from infants and pregnant mothers to the geriatric population.

Dr. Ryan has a love for athletics and all things competition based. In his own career, he was a college wrestling Division I All-American at 174 lbs. in 2012, an assistant coach for Cal Poly for the 2012-13 season, and in high school was a 3x WA state 2A wresting individual champion.

Dr. Ryan is still involved in his sports as he is currently the head coach for the middle school wrestling team in his community, and is also on the coaching staff at the local Inland Northwest Regional Training Center.

We will do our best to accommodate your busy schedule. Request an appointment today!