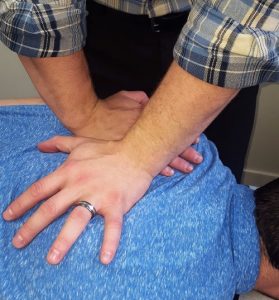 The word “chiropractic” was first coined in 1898 with Greek roots and is loosely translated as “done by hand”. As a result, chiropractic is the treatment and rehabilitation of neuromusculoskeletal system by hand or in a non-invasive manner. This is primarily done with the classic chiropractic adjustment. The chiropractic adjustment is one of the primary tools used in treatment and has many positive side effects that range from improved nerve flow, increased blood flow, increased mobility, and an arresting the onset or progression of arthritis and other forms of degeneration.

The goals of the chiropractic adjustment are the following:

The chiropractic profession started in 1895 and has only grown in evidence and popularity over its more than 100-year history. As modern science continued to improve through the 20th century chiropractors expand upon their knowledge of the human body and its vast interconnections alongside the growing medical community.

THE CHIROPRACTIC ADJUSTMENT AND THE SPINE

The human spine has many crucial functions some of which are the following: to protect the spinal cord and all the branching nerve roots, support the upright posture of the human body, and it is involved in most movement of the human body. The human spine is made up of 24 intersegmental levels that move independently of one another. When a joint subluxation develops it disrupts your nervous systems integrity and the joint may become restricted. A joint restriction can occur as a consequence of an alteration in the relative static position of the joint and the limitation of motion between vertebral segment levels. These alterations can come about because of reparative exertions, postural stress, or other factors that may change the function and or structure of those tissues. The end goal of the chiropractic adjustment is to directly change these tissue alterations and consequently reduce any effects they have on related neural structures as well as surrounding soft tissue and biomechanical function.

Vertebral subluxations are caused by unavoidable repetitive activities and are exacerbated by poor biomechanics, and postural strain that put repetitive micro-trauma into the joints, etc. Therefore, subluxations are inevitable and will occur with our busy and active lifestyles; it is just a matter of time. Most acute complaints or injuries will require a treatment plan of several visits per week for several weeks. However, once proper healing is achieved, function is restored, and symptoms are alleviated visits are lessened with the goal of maintaining the progression with regular chiropractic care. Once this has been attained treatment is typically considered wellness or maintenance care and this is where our patients begin to experience true health. It is very important for patients to follow their treatment plans as prescribed by their chiropractor in order to achieve long-term results, as the effects of the adjustment are cumulative.

We will do our best to accommodate your busy schedule. Request an appointment today!